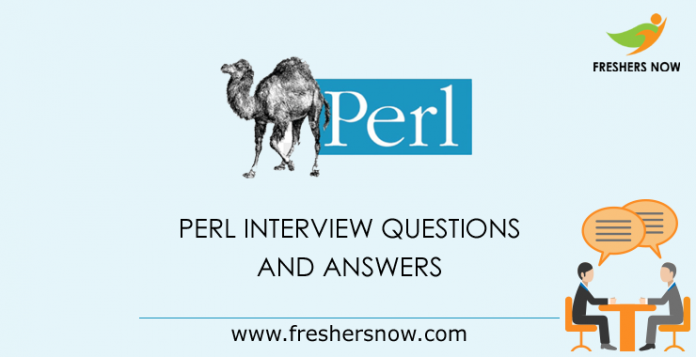 1. What is perl language?

2. What are the various flags/ arguments that can be used while executing a Perl program?

The following arguments can be used while executing a Perl program.

The value needs to be assigned to a variable before using it. the program may result in an unexpected output.

4. What are the different string manipulation operators in Perl?

Array slicing allows a user to retrieve more than one the elements of an array at once.

Output: 1 2
Thus ‘Slice’ the existing array and retrieve its elements.

This will assign a slice consisting of first 15 elements to a fortnight array.

Look at the following code snippet:

This code executes “grep” command on a list and matches the pattern string (/s) to the list. The output is only the elements.

7. Create a function that is available only inside the scope where it is defined?

8. Can we load binary extension dynamically?

Yes, the binary extension can be load dynamically but your system supports that. In case if it doesn’t support, then you can statically compile the extension.

9. How to replace every TAB character in a file with a comma?

10. Write syntax to add two arrays together in Perl?

To accomplish the same, we can also use the push function.

11. How many types of operators are used in Perl?

12. Explain what is Perl one-liner?

There are different data types in Perl. They are as follows:

14. Write syntax to use a grep function?

17. How can you say that Perl is compiler?

It was because the interpreter in the Perl is actually free to convert the program into the small codes.

18. Can the Compiled form be stored as a file in Perl?

No, it cannot be stored as a File

19. What is Closure in Perl and how it is helpful?

It was defined as the block of code in Perl which is used for capturing the lexical variable which can be accessed at a later section in a program.

20. Difference between Use and Require?

21. What kind of data is supported by this programming language?

There are three types of data namely:

24. Name an Instance you used in Cpan module?

The common packages used from CPAN are CGI, DBI. there are thousands of other useful modules.

Hash is basically used to comment the script line. This hash is an unordered set of key/value pairs that you access using strings as subscripts, to look up the scalar value corresponding to a given key.

26. What is the difference between Chop & Chomp functions in Perl?

28. What Command used for Help in Perl?

It is a special filehandle for standard error in any package.

ndd command will hardcore the speed of the network interface card.

OBP is called as Open Boot PROM. This OBP can be accessiable thru ok> prompt

Booting from CD-ROM can be done by the command

/etc/system is a kernal file of Solaris OS.

36. How do you boot from a network with Jumpstart?

It is a default variable which holds automatically, a list of arguments passed to the subroutine within parenthesis.

It provides a GUI interface.

38. How to Concatinate strings in Perl?

It was defined 0 value is the proper indication of the end of file for read() and sysread().

42. What is a Perl identifier?

A Perl identifier is a name used to identify a variable, function, class, module, or other objects. Perl variable name starts with either $, @ and also % followed by zero or more letters, underscores, and digits (0 to 9).

43. What package do you use to create windows services?

44. How interpreter is used in Perl?

The interpreter compiles the Perl program internally into a parse tree. words after a profound symbol will be ignored. Once compiled, the interpreter will execute it immediately.

45. Explain the meaning of closure in Perl?

The closure is a block of code that is used to capture the environment where it is defined, and it captures lexical variables that the block consists of.

46. Is Perl a case sensitive language?

47. What is the variable context in Perl?

Perl treats the same variable differently based on Context, the i.e. situation where a variable is being used.

It is used to get the current file name.

49. What is the range operator?

The range operator (..) is used to create sequential arrays.

Here double dot (..) is called range operator. This will produce the following result −

50. What is the purpose of strftime() function?

You can use the POSIX function strftime() to format date and time.